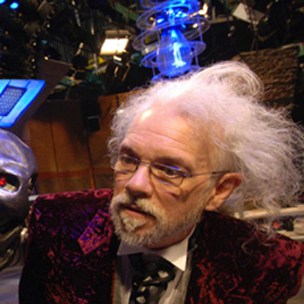 Number of years in current position: 14

You may have seen Professor Sharkey on one of his many TV appearances. He was the chief judge for every series of Robot Wars (BBC2), the expert commentator for TechnoGames (BBC2) and is currently the co-presenter for BBC Northern Ireland’s Bright Sparks. Or you may have seen him on news programmes or documentaries about his robot research.

In his day job, Professor Sharkey is engaged in research that uses mathematical techniques to allow robots to learn for themselves. Probably his most famous museum exhibition had a colony of predator and prey robots living in an artificial food chain where the predator robots hunted their prey to extract battery power.

This type of work requires some fundamental knowledge of a number of different disciplines including psychology, electrical and mechanical engineering, navigation, computer science and artificial intelligence but maths is at its core. He says that, “Maths is a very important part of my working life and allows me to conduct a lot of really fun research that would otherwise be impossible.”

Professor Sharkey left school at 15 to pursue a career as a popular musician but always had a love of maths puzzles. He was largely self-taught and studied calculus just for fun. In fact, apart from statistics, his first formal lessons in higher maths was when he attended advanced classes in Calculus and Linear Algebra at Stanford University in California when he was working there as a Senior Research Associate.

“It is sad for me that maths is treated as a difficult subject that is only for the few really bright ones. This is simply not true. It is much more difficult to learn to read and write and yet most of us manage that relatively easily. Of course being good at maths does not mean that you will be a world class mathematician any more than being good at reading and writing will make you a great novelist. But with the right attitude anyone can become competent in maths. Just treat it as a game with a set of strict rules and you will be fine. And remember, you are never too late to learn something new!”