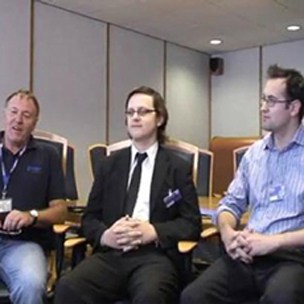 ‘He’s ahead of the game’

Phil Carter and Paul Gardner work at Unipart Manufacturing in Coventry where they are members of the Finance Department. During July and August 2008, the company welcomed Peter Williams, a Year 12 student from Blue Coat School in Coventry. Peter completed a 6 week placement under the Nuffield Bursary Scheme.

Can you tell us a little about your roles at Unipart?
Phil : I am a Principal Engineer and have been with Unipart for about 12 years.  Throughout this time my role has been to generate improvements in the company. I have recently been working in Finance to review the way we generate our quotations to the customer.
Paul : I am the Finance Manager here and I am a chartered accountant. One of my jobs is costing of products.

What made you interested in the Nuffield Bursary Scheme?
Peter : I have been planning for most of my life to be an accountant  and I thought this would be a great opportunity to experience the world of work.
Paul : We were quite excited to hear about the scheme because we had a project coming up which we thought would fit very well with the student.  We saw that the project could be a perfect introduction to the notion of costing and the industry side of accounting.

Can you describe the project which was completed in the 6 week placement?
Paul : As a manufacturing company we have to explain to our customers exactly what the costs of the products we make for them . A key element of that is saying what overheads the business uses.  The project aimed to look at a new approach to our system for dealing with this which involves re-costing with a machine rate per hour. This is something which we had never tried before. It was an ambitious project to collect all the data, analyse the costs and understand these.
Peter : I had to use a lot of creative thinking derived from Statistics modules at school to determine how to cost specific components. The main difference I found between working here with maths and at school was that the data which I was working with was a lot less neat and sometimes not even easily available whereas at school we work with easy fictional data a lot of the time. I also had to use some concepts from Mechanics and a lot of spreadsheet tools.
Phil : This project was very exciting because unlike a lot of projects in the past we really didn’t know what the outcome would be. Peter has really been at the very ground floor; he has been learning as we have been learning.

What have you learned in the project?
Paul : Peter obviously has a very good mathematical background and he has brought fresh ideas to the task. He has used a lot of common sense in his work which has been great
Peter : I know a lot more about the industry now. Before I was going into it blind but I have gained a valuable insight into how the workplace operates. It’s been brilliant.
Phil : Peter has experienced something at a very early age which some of our Finance people haven’t experienced. He has been down on the shop floor and understood how everything comes together in the actual working environment.  That is something which he would not pick up in his accountancy course at university and will prepare him well for the future. He’s ahead of the game.

To find out more about the Nuffield Foundation and Nuffield Science Bursaries visit the website www.nuffieldfoundation.org.