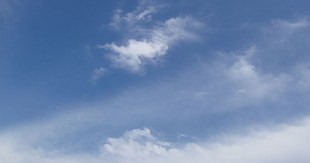 Why is the sky blue?

Home / Why is the sky blue?

It is something we take for granted. The sky is not yellow, green or purple – it’s blue, very blue. The reason for this very distinct hue is due to the way sunlight dances through the Earth’s atmosphere.

The blanket of gases that clings to our planet is mostly made of nitrogen (about 78%). The oxygen we breathe provides 21%, the remainder is mainly argon and carbon dioxide. It is the interaction of the light from the Sun with the nitrogen that is most responsible for the familiar colour above our heads.

Light can be thought of as a wave, just like sound is a wave (although light is a ‘transverse’ wave and sound is a ‘longitudinal’ wave). A wave has a series of ‘peaks’ and ‘troughs’, and the distance between two neighbouring peaks (or troughs) is called the wavelength. The electromagnetic spectrum – of which visible light is part – is made up of many different wavelengths, from short-wavelength gamma-rays to long-wavelength radio waves.

The wavelength of visible light varies between 390 – 750 nanometres (one nanometre is one billionth of a metre). This range gives us the different colours of the visible spectrum, as seen in a rainbow or with a prism. Light with a wavelength towards the lower end appears violet/blue, with light towards the higher end seen as red.

In the late 19th century, British physicist Lord Rayleigh described a phenomenon where a small particle can scatter light that has a longer wavelength than its diameter. This came to be known as Rayleigh Scattering. The size of a nitrogen molecule is about 40 nanometres, about ten times smaller than blue light, and so atmospheric nitrogen is able to Rayleigh scatter all of the light from the Sun.

So the Sun’s light is scattered in all directions by atmospheric nitrogen molecules, but it is blue light that is scattered most strongly. This means more of it reaches us on the ground during the day. Red light is only scattered a little bit, continuing its journey through the atmosphere with its path only marginally altered. 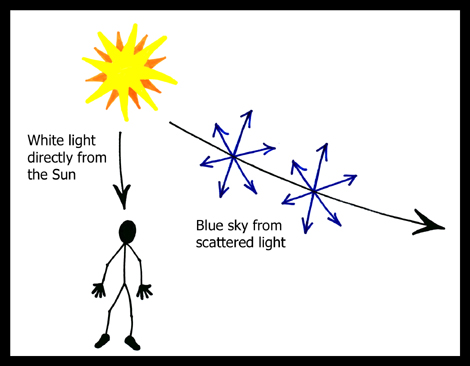 However the sky does appear red, and not blue, in the early morning or late evening close to sunrise and sunset. At these times the light from the Sun has to travel much further through the atmosphere to reach you, giving the light more chances to interact with nitrogen molecules and be scattered. In fact, so many scatterings occur that very little blue light manages to make its way through the maze of nitrogen at all. The long wavelength of red light means it is scattered least and is the predominant colour to reach your eyes. 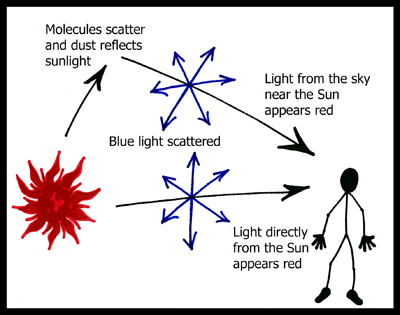