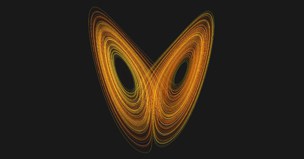 The butterfly effect and the maths of chaos

Home / The butterfly effect and the maths of chaos

You may already have heard of the Butterfly Effect – the idea that an event as small as the flap of a butterfly’s wings can change the course of history.  The term has entered the public’s imagination and we can all think of examples in our own lives of small insignificant events which then have had a big impact later on.

You may however not realise that the term was in fact coined by an American mathematician called Edward Lorenz.  Lorenz was working in the field of meteorology and he realised that small changes in initial conditions in the weather could lead to vastly different outcomes a few days or weeks later.  Just because the weather conditions looked the same on two days, it wouldn’t mean that the weather could be predicted a few days later.  The weather could be only very slightly different on the two days and it would lead to vastly different outcomes later on. This led to Lorenz using a metaphor of a tiny butterfly flapping its wings causing a hurricane a few weeks later over the other side of the world.

Up to this point mathematicians and scientists had been used to discovering equations which exactly described the physical world, allowing it to be predicted exactly.  For example the swing of a pendulum could be predicted so precisely that it could be used in clocks for telling the time.   Mathematicians expected that all systems would be the same, and that we only needed to discover the right equations in order for things like the weather to be predicted exactly.

What Lorenz showed was that in fact some systems are what we now call chaotic. This means that very small changes to the starting conditions will produce widely different results.  The weather is the most famous example of a chaotic system, however chaos crops up all over the place and can be found in areas as diverse as the human body and the stock market.

Due to the chaotic nature of the weather system, forecasters can only really predict the weather with any accuracy around 5-10 days ahead.  This means that even with today’s really powerful computing power, we will always be limited in how far we can look ahead.

You might easily mix up chaos with randomness, when in fact it is exactly the opposite. Chaotic systems can often be modelled or described using sometimes quite simple equations, so we aren’t usually talking about randomness.  Let us consider our pendulum again – a simple rod attached at one end which can swing backwards and forwards.  It is a really simple object where we can predict its movement exactly.  Now let us make a small adjustment turning it into what is called a ‘double pendulum.’  We do this by attaching a second rod which can swing from the first rod.

The equations which describe the motion of pendulums can be written down exactly so it could be easy to make the mistake of thinking that the double pendulum will move in a simple way just like the single pendulum.

If you are interested in finding more out about chaos, then the online mathematics magazine Plus has a whole library of past articles on the topic.  Click here for details.