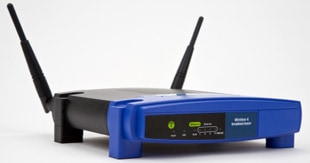 Wireless network is great, letting you surf the internet from your sofa without worrying about a tangled mess of cables, but the technology behind Wi-Fi was originally invented for an entirely different purpose. In 1977 an Australian astronomer named John O’Sullivan used a mathematical technique called Fourier transforms to improve his radio telescope, and today those same principles govern every Wi-Fi device in the world.

It all began in 1974, when the physicist Stephen Hawking realised that black holes aren’t always black. Not even light can escape from these mysterious astronomical objects, which makes them very difficult to observe, but Hawking calculated that particles just on the edge of a black hole might reveal a clue. Rather than falling in to the black hole, these particles receive a boost from its intense gravitational field and fly away, showing up as radio waves in the night sky. 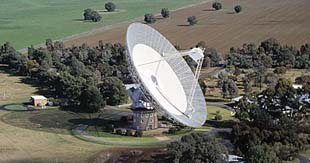 O’Sullivan began hunting black holes by looking for these radio waves, but he found that the signals were too distorted to be used. He realised that Fourier transforms could help clean up the data, and designed a computer chip to perform the necessary calculations. A Fourier transform basically takes a complex signal and breaks it down in to simple components, letting you remove the noise and reconstruct the data.

Unfortunately O’Sullivan never found the black hole he was looking for, but the techniques he developed would later find a more down-to-Earth application. In 1990 O’Sullivan and his astronomer colleagues decided to apply their knowledge of radio to create computer networks without wires, but again distortion was a problem. Radio waves bounce off any surfaces in the surrounding area, causing echoes in the signal that make data transfer impossible.

Fourier transforms came to the rescue once more. Adapting his method from the hunt for black holes, O’Sullivan created the chip which made Wi-Fi a reality. The technology is a fantastic success, freeing computer users from their desks and paving the way for internet wherever you are.

None of this would have been possible without Fourier transforms, but what exactly is this neat mathematical trick? They’re actually a generalisation of a slightly simpler idea called a Fourier series, which can turn any periodic function in to an infinite sum of sines and cosines. A function is periodic if it repeats itself at regular intervals, for example sin(x) and cos(x) repeat every 2?. Using this property you can replicate any periodic function f(x) by adding the right combination of sin(x) and cos(x), known as the harmonics. The result is the Fourier series of f(x), written:

You can imagine the function as the sound of a choir, and the terms of the Fourier series as each individual singer. One person can only sing a simple melody, but many voices together create a multi-layered song. In the same way, fairly basic sines and cosines can build a variety of complex functions.

Fourier transforms extends this concept to non-periodic functions, replacing the sum with an integral, but the basic principle is the same. Once you’ve converted your noisy signal into its Fourier equivalent you can remove the harmonics corresponding to the unwanted noise, and reverse the transform to get a clean signal.

It’s impressive that the same maths used to search the skies also powers your wireless network, but Fourier transforms can do so much more – they crop up in audio processing, medical imaging, and financial option pricing. In fact, work in any area that involves signals and waves will benefit from knowing about Fourier transforms. It certainly paid off for John O’Sullivan, who in 2009 received Australia’s top scientific award, the Prime Minister’s Prize for Science.