How do we make colours? Peer at a television or computer screen with a magnifying glass and you’ll see the picture dissolve into tiny red, green and blue lines. Take a close look at photo in a newspaper and you’ll find that the large patches of colours are actually made up of thousands of little dots. These two ways of making colours work slightly differently, but both involve a special kind of colour maths.

Making colours by mixing lights is known as additive colour mixing, and if you’ve ever been to a concert or the theatre then you’ve probably seen it in action. The red, green and blue stage lights can be used to make any colour you like, simply by overlapping the beams and adjusting the strength of each light. Television and computer screens also use a kind of additive mixing, but the colours don’t actually overlap – they’re just so small and close together that it looks like they do.

The colour you end up with in additive mixing depends on the ratio of the lights you use. For example, mixing red and green light in a 1:1 ratio makes yellow light, while mixing green and blue or red and blue in a 1:1 ratio makes the colours cyan or magenta. Mix all three colours together in a 1:1:1 ratio, and you’ll get white light. This method of colour mixing is also known as RGB, for Red, Green and Blue. 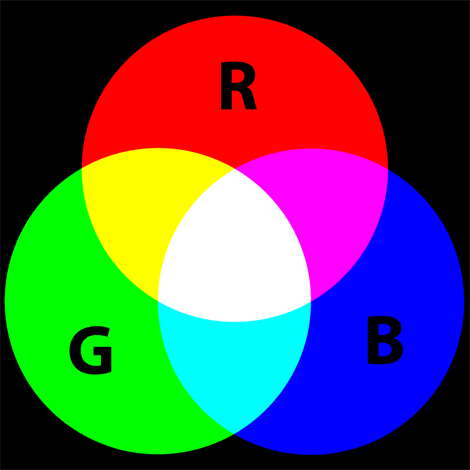 These simple ratios give you the basic colour building blocks, but things get much more interesting when you start experimenting with more complex ratios. Stage lighting technicians careful adjust the ratio of each light to give performances a certain mood, such as boosting the levels of blue to indicate cold or red to suggest warmth. Why not try mixing lights for yourself and see what moods you can create?

The colours used in printing are made using a second method known as subtractive colour mixing. We have to use this different method because of the way our eyes work. When we see a green object, such as an apple, we’re actually seeing white light with the red and blue parts removed. The apple absorbs the red and blue light but reflects the green, causing us to see a tasty green snack.

We can see how this works by looking at the following colour equation: white = red + green + blue. This equation is true because mixing light of all three colours produces white light. If we rearrange this equation, we can see what colours we need to subtract in order to produce other colours. For example, white – red = green + blue. We know that mixing green and blue light makes the colour cyan, so using greater amounts of cyan ink will absorb more red light, making the object look less red. In the same way, magenta absorbs green and yellow absorbs blue. 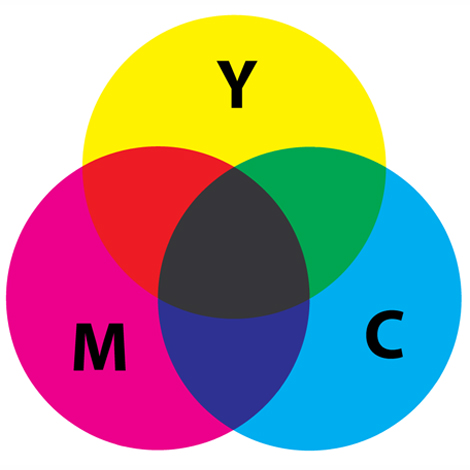 Mixing different amounts of cyan, magenta and yellow controls which colour light reaches our eyes, and lets printers produce any colour they want. Just like in additive colour mixing, varying the ratios of cyan, magenta and yellow produces different results. Again, you can try it out for yourself. You’ll notice that mixing all three colours produces black, but it isn’t a very dark black, which is why printers normally use a separate black ink. This system is called CMYK, for Cyan, Magenta, Yellow and Key black, and if you create an image on screen with RGB colours it has to be converted to CMYK for printing, a process which also involves mathematical calculations and can produce dull-looking results if done badly.

Remembering how to add, subtract and mix colours with ratios is important because we use colours to express our mood, convey information, and replicate the shades of the world around us. Many different people need to know how to mix and create colours in order to do their jobs, and maths helps them to get the exact colour they need.

Colour Me RGB
In the red? Green with envy? Feeling blue? Sharpen your eye for colour in this colour-matching game, by Scott Kim.