Sat-nav systems have found their way into millions of cars over the last decade, and they’re now also showing up on the latest smartphones. Drivers are getting increasingly used to hearing the phrase “turn around where possible”, but how do these small gadgets know that you’ve gone off track? It’s all down to satellites, spheres, and a few sums.

Putting the “sat” in sat-nav

Sat-navs know where they are thanks to a network of 24 satellites called the Global Positioning System (GPS). These satellites orbit the Earth at a height of around 20,000 km, in a pattern that means you can always see at least four of them from any position on the globe. Each satellite continuously broadcasts its location and the current time. GPS receivers like sat-navs look for this broadcast, and compare the time it was sent out to the time it was received. Because these signals always travel at the speed of light, about 300,000,000 m/s, the receiver can work out how far away it is from the satellite using the equation speed × time = distance.

Just knowing the distance from one point isn’t much use though. Imagine being lost and asking someone where you are. “You’re 100 miles from London”, they say. Depending on the direction, this could mean you’re in Birmingham, Norwich, or even Northern France!

The information you’ve got only pins your location down to a circle around London with a radius of 100 miles, so you ask another person for help. “You’re 110 miles from Hull”, they reply. Drawing another circle around Hull, that narrows your possible location down to just two places, the points where the two circles intersect – Birmingham and Norwich. Asking a third person helps you work out which city is the right one. “You’re 90 miles from Cardiff”, they say, and putting this together with the other two circles means you must be in Birmingham.

A time and a place

GPS works in almost exactly the same way, using information from multiple satellites to pinpoint your location. The only difference is the number of dimensions. The example above uses circles on the two-dimensional surface of the Earth, but GPS uses spheres in three dimensions.

The signal from one satellite places you on the surface of a sphere, while another satellite places you on a different sphere. All the points where these two spheres meet form a circle, and the sphere from a third satellite meets the circle at exactly two points, just like Birmingham and Norwich in the example above. You need a fourth sphere to pick between these two points, and this can actually be the Earth itself, because only one of the two points will lie on its surface. 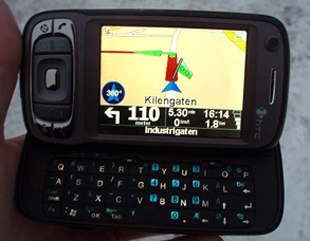 There’s just one problem. Because the speed of light is so large, even a small timing error can mean disaster. If your sat-nav’s clock is out by just 1/1,000th of a second, it will get your location wrong by 300 km. In other words, it’ll say you’re in Dublin when you’re actually in Birmingham! To avoid these kinds of errors, the clocks inside the GPS satellites and your sat-nav need to be exactly in sync. The satellites are all fitted with extremely accurate atomic clocks, but these cost thousands of pounds each – too expensive for everyday use.

Thankfully, there’s a clever solution. Although the spheres of three satellites will always line up at two points, even if there is a timing error, a fourth sphere won’t. Your sat-nav can work out how to redraw all four spheres to make them all line up, and then use the equation speed × time = distance in reverse to calculate the correct time. For example, if all the spheres need to be moved by 30 km, that means the sat-nav is out by 1/10,000th of a second. With the error corrected, your sat-nav is accurate to the nearest 10 metres or so, and future sat-navs could be even more precise. The European Union are creating an alternative to GPS called Galileo, which will give your location to the nearest couple of meters, so say goodbye to getting lost – though you may still make a few wrong turns!