Metals in the food chain

AC/DC have assured us that rock and roll ain’t noise pollution, and who can argue with them? Heavy metals, on the other hand, are a persistent pollutant and need to be strictly controlled. Sorry Ozzy – while some metals are necessary in small amounts to keep your body healthy, many others are carcinogenic or toxic.

Dangerous heavy metals include chrome, copper, lead and mercury. They can occur naturally in water supplies, but man-made activities like industry and mining are the main cause of this pollution. Only tiny amounts of these metals (1 in 1,000,000,000,000) typically make it into the water supply, but they are still very dangerous due to a phenomenon called bioaccumulation.

Mercury is a heavy metal which causes damage to the central nervous system. It is commonly found in aquatic environments. The algae which form the first level of the food chain can concentrate the mercury in the surrounding water 20,000 times. When they are consumed by microorganisms, the mercury within the algae is concentrated anothing seven times. After the nutrients pass through to the next levels of the food chain and end up in large fish like marlin, the mercury concentration will have increased nearly 700,000 fold.

Organisms stuck in a polluted environment will take in mercury with all their food sources so their levels of heavy metal will remain constant. However, other predators, such as humans, will only consume some contaminated food. The body can get rid of heavy metals, but it takes time.

Getting rid of metal

Microorganisms in the sea change mercury into the compound methylmercury. In humans, it takes 50 days to get rid of half the methylmercury in the blood. After another 50 days, half of that will be gone, leaving just a quarter of the original amount. Another 50 days will reduce this to an eighth, and so on. In each time unit the amount of mercury drops by half. The time taken for half the material to go is called the ‘half-life’. Many things in nature show this kind of behaviour, from radioactivity to the decrease in volume as sound travels through a barrier. It’s called exponential decay, and it is special to mathematicians as well as useful to scientists because the gradient at any point is the proportional to the x-coordinate of that point. Plotted on a graph, it has a distinctive shape called an exponential curve. The one below shows the decay of one can of tuna’s worth of mercury, approximately 30 micrograms (a microgram is one millionth of a gram). 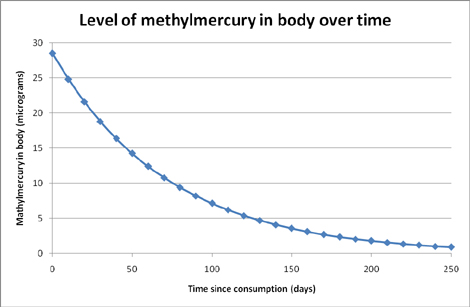 But whenever someone eats another portion of fish, this new mercury is added to the pollutants in the blood. To graph this, you add another exponential curve to the first, translated to match the time the fish was eaten. Other graph transformations you have learnt can be used to plot a larger or smaller portion of fish, or a pollutant that takes more or less time to leave the body. 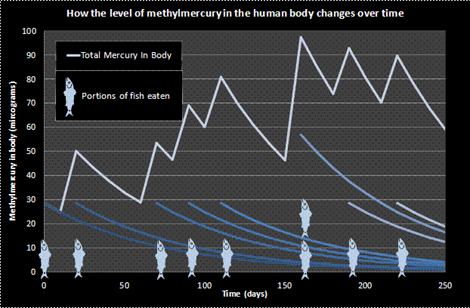 Biologists and doctors think it is unhealthy to exceed 2 micrograms of mercury per kilogram of your bodyweight per day. Pregnant women or nursing mothers are advised to limit themselves to just 0.1 micrograms per kilogram. It is not a great idea to cut out fish entirely since it contains oils and vitamins that are very good for your health. Looking at graphs like this, they have found that a safe level of fish for everyone to consume is two portions of fresh oily fish, or four of canned, per week.

This is an example of how maths helps ecologists study the transport of pollution, biologists study its affect on animals and plants, doctors advise on preventing health problems, and the general public take control of their well-being.