From a morning coffee to an evening bath, fluids are all around us. Water and air – probably the two fluids we encounter the most – behave in a very familiar way, taking the shape of their container and flowing easily. These are so called Newtonian fluids, named after the famous mathematician and physicist Sir Isaac Newton.

One of the things that make water and air Newtonian fluids is that, unless the temperature or the pressure changes, they maintain a constant viscosity – the measure of the fluid’s resistance to flow. Newtonian fluids, for example, don’t change their viscosity when under stress (when a force is applied to them). Drop a pebble in a pond or strike a football through the air and neither fluid will become more viscous.

The same cannot be said for non-Newtonian fluids. When stressed, this class of fluids begin to behave very strangely indeed: they can get thicker or thinner, some instantly and some over time.

Viscosity is the constant of proportionality between the shear stress and the velocity gradient, as described by:

? is the shear stress exerted by the fluid (“drag“)

? is the fluid viscosity

dv/dy is the velocity gradient perpendicular to the direction of shear.

There are four main types of non-Newtonian fluids:

Rheopectic fluids get thicker – more viscous – as they are stressed over a period of time. It is no good supplying an instantaneous force, it needs to be sustained. A good example of a rheopectic non-Newtonian fluid is cream. If you stir cream just once then nothing much will happen. However, keep stirring and it will thicken.

Thixotropic fluids show the opposite behaviour to rheopectic fluids – they get runnier as a sustained force is applied. Another kitchen based example is honey. If you leave honey unused for a long time then it gets more viscous, particularly at the bottom of the jar, and it is doesn’t flow very easily. However, if you give it good stir then it returns to the right consistency to put on your toast.

This graph shows how both rheopectic and thixotropic non-Newtonian fluids behave as a force is applied. The key thing here is that the force has to be sustained – the longer the force is applied the more the viscosity changes. 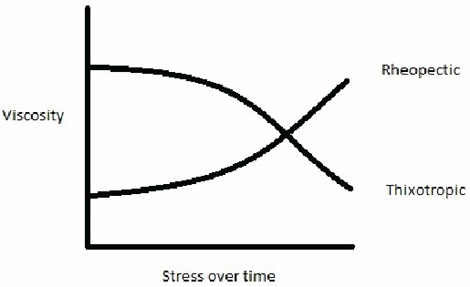 Unlike rheopectic and thixotropic non-Newtonian fluids, those described as dilatant will change their viscosity dependent on how much force applied is, not how long for. The harder you hit a dilatant fluid the more viscous it becomes. One such example is Oobleck – a fluid similar to raw custard make of corn starch mixed with water. Unstressed it behaves as you would expect, but applying a strong force makes it more viscous and it behaves much more like a solid – a fact that allows you to walk on it. In the video at the bottom of this page you will see someone walking across Oobleck. It has been slowed down to 600 frames per second. Walking quickly and stamping down hard on the fluid causes it to become more viscous and support your weight. If you walked across slowly and trod more lightly, you’d sink and become a custardy mess.

Pseudoplastics are the opposite of dilatant fluids – they get runnier the harder the force applied. Returning to the kitchen you use the fact that tomato ketchup is a pseudoplastic whenever you try and get any out of the bottle and onto your chips. The reason getting at the ketchup can be so tricky is that it’s very viscous – it has a high resistance to flow. Apply a considerable force, either by hitting the bottle or giving it a vigorous shake, and it becomes runnier and easier to get out of the bottle due to its pseudoplastic properties. 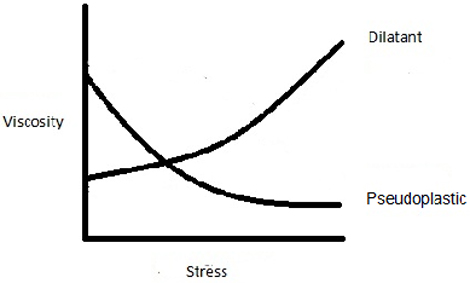 The graph above shows how both dilatant and pseudoplastic non-Newtonian fluids behave as a force is applied. The key thing here is that it doesn’t matter how long the force is applied for, changes in viscosity only depend on the size of the force.

So next time you are in the kitchen, whether it is with cream, honey, custard or ketchup, you’ll know the maths behind non-Newtonian fluids is helping you get the most out of your food.

Non-Newtonian Fluid on a Speaker Cone
An interesting experiment.