Home Articles How to be statistically savvy

How to be statistically savvy

Comment is free; facts are sacred. You can’t argue with numbers – they tell it like it is. Or do they? Politicians and the media often whip out figures to support or make their case, but because they need interpretation, numbers can be just as misleading as anything else. Statistics can be abused, knowingly or unknowingly, with a few short words or a decimal place to the wind.

Your maths and statistics classes can show you how to level a critical eye at what you’re told and find what’s actually true. Here’s some basic points to keep in mind while reading:

What are they asking you to swallow?

Knowing some ballpark figures can help you get a handle on claims. Things like:

These are easy enough to look up using a search engine or though the Government Office of National Statistics. If you have these in mind, or know where to find them, you can see exactly what a big deal the numbers you’ve been given are.

Does this match what you see?

You can also compare to your own experience, as long as you keep your biases in mind. Think about what you learnt about sampling for your statistics modules. How relevant is your evidence? If you don’t know many pensioners, the fact that you don’t know any who are having trouble paying their fuel bills shouldn’t give you a reason to suspect a story about that. If, on the other hand, government reports say that young people of all ethnicities are stopped and searched equally frequently, but you know that only your non-Caucasian friends have experienced this, you might have a few questions (assuming you have quite a few friends).

Use the errors given

How reliable are the numbers anyway? Just before an election, no one has any actual facts to report on. At this stage the results of opinion polls are splashed across the news – if one party has a 6% lead, are they a shoo-in? Not really. Because opinion polls usually have a margin of error of 3% each way, their lead might actually be anywhere between 0 and 12%. That wouldn’t make such a nice headline, though.

Match it to models you know 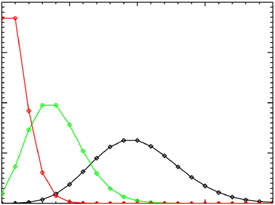 If errors aren’t handily given, you can use the probability distributions you study as a rough guide. Take the Poisson distribution: it’s suitable for situations where the number of measurements is large, but the probability of each individual measurement occurring is small. So that’s applicable to traffic accidents (lots of cars, low chance of crashing), medical screening programs (lots of scans, low disease incidence) and faulty goods in factories (high output, few errors), among others. The standard error on a Poisson distribution is proportional to 1/?N, where N is the number of measurements taken. If a medical screening programme tests 10,000 people, then their error is 1/?10,000, or 1/100, 1%. So if they quote accuracy to less than 1% on the basis of that screening, something is fishy.

The statistics you are learning aren’t just theoretical. It’s extremely practical maths which guides all considered decision making – from international policy to personal medical choices. Knowledge is power; make yours work for you.