Every sport has its winners and losers, individuals and teams that ride high on streaks of success or slump down into desperate failure. Sports commentators talk of being “in the zone” or having the “big mo”, while sports scientists know it better as “psychological momentum”, but are these winning streaks really the result of success breeding success, or are they nothing more than a statistical fluke?

Belief in winning streaks is sometimes known as the “hot hand fallacy” – “hot hand” because basketball players believe their hands are “hot” when they are on a roll, and “fallacy” because unfortunately, maths shows that it isn’t true.

while on the other hand if losing the first point makes you more likely to lose the second,

In 1985, three researchers from Cornell and Stanford Universities in the United States tested this hypothesis by analysing the performance of basketball players and looking for evidence of conditional probability at work. In most cases they found that a player’s attempts at scoring were mathematically independent of their previous efforts, and that runs of successful scoring attempts occur no more than you would expect by random chance. In other words, they found no evidence for winning streaks because 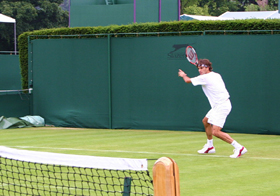 It’s not “game over” for streaks just yet though. While similar studies of other sports shows that the scoring in most games is mathematically independent, a surprising result indicates this might not be true for tennis. Statistical analysis of tennis matches suggests that winning one match can actually increase the chance of winning the next – psychological momentum in action.

The finding comes from a 1997 study by two statisticians at Trinity College Dublin in Ireland, who analysed data from the 1987 Wimbledon and US Open tennis tournaments in an effort to find evidence of psychological momentum. They looked at matches that were won by 3 sets to 1 or 3 sets to 2 and measured their statistical distribution.

There are three possible ways for a player to win by 3 sets to 1 (LWWW, WLWW, WWLW) and six possible ways for 3 sets to 2 (LLWWW, LWLWW, LWWLW, WLLWW, WWLLW, WLWLW). If the probability of winning a set is independent from the probability of winning the previous set then all of these sequences would be equally likely, but the evidence shows that match winners were more likely to lose a set earlier rather than later – in other words, win by a streak at the end. For example, the researchers found that the sequence LWWW was roughly 50% more likely than WWLW.

Find the pattern, avoid the fallacy

Probability and statistics can sometimes be unintuitive, leading us to see patterns in the data that aren’t actually there, and the hot hand fallacy is just one example of this. Another is the gambler’s fallacy, which is the exact opposite of the hot hand fallacy – a gambler who is down on their luck keeps betting in the hope that they will soon have a win, believing that their luck will balance out in the end. Thankfully, learning about probability and statistics helps us avoid these sorts of mistakes and find the patterns that really do exist.

Maths and Sport: Countdown to the Games
‘Maths and Sport: Countdown to the Games’ is an exciting new project from the award-winning Millennium Mathematics Project at the University of Cambridge. To celebrate London 2012 they are developing free online mathematical articles and activities exploring maths and science through the Olympic and Paralympic Games, aimed at a wide audience from school students and their teachers to members of the public.