Home Articles On the way to Wembley

On the way to Wembley

Nearly ¾ of a million people watch their favourite league football team play every week. You might be one of them – have you ever thought about the stadiums in which they play? They have been designed to make sure you have the best possible day out, not only during the game itself, but from the moment you get through the turnstile.

Decisions about what the stadium will look like and how it will work have to be made during the design stage, many years before the players walk onto the field for their first game. So engineers have to use their mathematical skills to predict the behaviour of both the stadium and the spectators in order to perfect their designs.

Keeping it in the air

Stadiums usually have some sort of roof to keep the rain off. In more normal buildings like a house or school the roof is held up by walls or columns. But in a stadium these would get in the way of the view of the pitch, and even Rooney’s skills at ball-dribbling would be put to the test if he had to weave in and out of columns on the pitch.

So a stadium roof has to be strong enough to reach from one end of the stadium to the other without being supported on columns in between. And there has to be a hole in the middle to let in natural light for the pitch to grow!

There are various ways of achieving this, from Arsenal’s carefully shaped steel trusses, to Wembley’s iconic arch and cables. Engineers use computers to model the forces and movement in the roof, predicting how the roof will behave and making sure it is strong enough to withstand high winds or heavy snow.

Get out of your seat and jump around

Withstanding the weather is not the only problem for the engineers – a stadium has to endure the spectators as well. When a goal is scored, half of the fans will jump to their feet all at once to celebrate or Mexican-wave. If the stadium is being used for a pop concert, the whole of the audience might be jumping or swaying in time with the music. This all loads more force onto the stadium, whose floors have to be strong enough to resist not just the weight of the people, but also the movements caused by them jumping repeatedly.

Just like the movement of a diving board in a swimming pool builds up and up as the diver bounces on the end, a stadium tier can move more and more as the people all move in time. This is a phenomenon called resonance. Stadium designers use equations of frequency and response to carefully analyse this behaviour and make sure the stadium won’t shake apart when 75,000 people all jump at the same time.

The biggest clubs like Manchester United regularly have match attendances of over 75,000, who all have to get in and out safely and efficiently. Mathematicians use equations to model the flow of people, to make sure they can all get to their seat in time to see the kick-off, and that they could all be evacuated from the stadium quickly in an emergency. These same models are used to make sure there are enough food outlets to keep everybody happy during half-time with pies or burgers.

They can even be used to provide enough male, female and disabled toilets. If you are queuing for a toilet, you can’t spend money, which means lost revenue for the club and one less international star in next season’s line-up. It may only be a few pounds for a burger and coke, but times that by the number of spectators and by the number of fixtures in the season and you can see how it really makes a difference.

Keep your eye on the ball 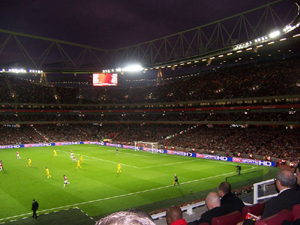 Fitting 75,000 people around a fixed sized field is no easy task. They all want to be able to see clearly without needing binoculars because they are so far away from the action. Once again, the designers use maths and especially trigonometry to model the shape of the seating tiers to get good views for as many seats as possible.

Getting in on the action

Maybe you aren’t able to go to the stadium and watch the game in person. But that doesn’t mean mathematics can’t help you enjoy watching the game on TV. The new High-Definition technology required for digital television needs much higher levels of light on the pitch to pick out all the detail. The designers have to optimise the position and brightness of all the flood-lights so that the TV cameras, as well as the players, have an even distribution of light on the pitch without shadows.

So next time you are lucky enough to watch a live sporting event, be it in person or on TV, spare a thought for the engineers who designed the stadium, and the many different branches of mathematics they have used all come together to make each match so special.