Home Articles The answer is blowing in the wind

The answer is blowing in the wind

The world is facing an energy crisis, as supplies of the fossil fuels that have powered development for the last 300 years are running out. Alternatives are being sought in the form of renewable energy – tapping the resources that are constantly produced by our planet. Wind power is a promising option, particularly for the UK. Weather records show that the UK has many locations where wind direction and speed are more or less constant, which is ideal for setting up wind turbines. 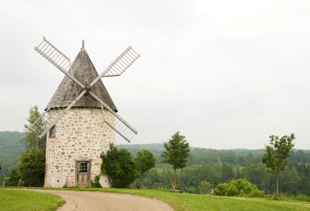 Wind power has been tapped since the 7th century BC. Initially windmills performed purely mechanical tasks, such as grinding heat and pumping water. Later wind turbines linked the rotational motion to a generator, converting clean, abundant wind energy into versatile electricity. Modern wind turbines come in a variety of designs – from the common white pinwheel to the rarer ‘eggbeater’. All have blades, carefully aerodynamically shaped, to convert linear wind flow into a sideways spin. 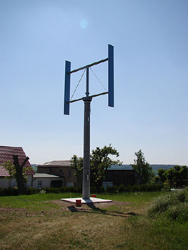 However, because it’s an air stream rather than a single solid mass, we have to talk about mass incident upon the turbine per second.

The mass of air hitting blades every second is the mass of 1 m3 of air (density), multiplied by the area that the blades cover, (? r2) times the velocity the air is travelling at (v).

So we can use this mass-per-second in the standard kinetic energy equation to get the total energy the wind delivers each second: 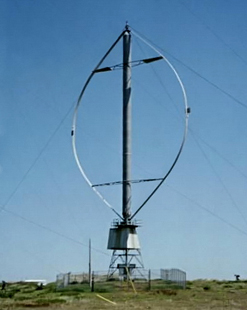 But not all the energy in the wind can be extracted. When air hits the turbine blades, is deflected off them, causing them to rotate. However, if all the kinetic energy is removed from the air, it then stops dead: ‘piling up’ behind the turbine and blocking more airflow. This places a theoretical limit on the maximum efficiency of a turbine.

This ceiling was calculated by a physicist named Albert Betz using the equations of fluid dynamics. These come from applying the principles of conservation of energy and momentum to a fluid. He found that the maximum energy an ideal rotor can extract from wind is 59.3%.

However, this result is only valid for the idealised situation. In real life there are losses in the form of turbulence and friction. Mathematicians use fluid dynamic modelling to find the optimum shapes and number of blades and mast designs to minimize this, while algorithms allow turbines to get the maximum power from the changing winds. With these optimizations, turbines can now extract about half of the energy carried in the wind – still enough to power the UK several times over.