The traditional Japanese art of origami conjurers up images of delicate cranes and ornate flowers folded from just a single sheet of paper, but modern origami artists can do so much more. Now, medical devices, car airbags and space telescopes all benefit from their expertise, thanks to a little bit of help from mathematicians.

People had been happily folding paper for thousands of years before the mathematicians came along, but there were limits to what could be made from a single sheet, and tricky details such as insect with lots of legs or antennae were thought to be impossible. In the mid 20th century, scientists and mathematicians become interested in the potential of paper-folding, and started developing mathematical rules for origami.

In 1992 the Japanese mathematician Humiaki Huzita published a set of six axioms, or basic rules, that describe every possible way of folding paper. For example, the first axiom says that you can always fold a line between two particular points – click here for a full list. It turns out these axioms had actually been discovered a few years earlier by Jacques Justin, whose work was somehow overlooked, and he had also described a seventh axiom, which was later rediscovered by Koshiro Hatori.

These axioms are more than just instructions for folding paper, as they can actually be used to perform calculations, such as solving cubic equations of the form x3 + ax2 + bx + c = 0. You can find out why at Hatori’s origami site, along with how to double the size of a cube or divide an angle into thirds with nothing but a sheet of paper – both involve finding the cube root of 2. 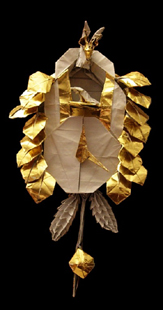 A mathematical understanding of origami meant modern-day folders could create models far beyond those of any ancient practitioner, but complexity comes at a cost. Folding some advanced origami patterns involves finding precise points on a sheet of paper, which forced many modellers to resort to a ruler and pencil. Unhappy with this inelegant solution, Robert Lang, a physicist turned professional origami master, wrote a computer program to restore the purity of origami.

Lang’s ReferenceFinder software mathematically generates a series of folds that will locate any point on a sheet of paper with 99.9% precision. The program contains the seven axioms of origami, which describe all possible folds, and can rapidly try out different sequences that will lead to any point you require.

Not content with just finding particular points, Lang has also written TreeMaker. It turns simple stick figure diagrams into origami blueprints called “crease patterns”, which can then be folded to create the finished model. The key to finding the right crease pattern is a mathematical problem called circle-packing.

Details on an origami model, such as horse’s legs or beetle’s wings, are often represented by flaps of paper. Lang realised that these flaps start off as circles on the unfolded paper, with the circle’s radius equal to the length of the flap. Each circle can only be folded into one flap, so they can’t overlap, and designing a crease pattern means figuring out the best way to position these circles to create the model you want without wasting too much paper. Thankfully mathematicians have studied the circle-packing problem for centuries, so Lang put their work to good use, as he explains in this video.

Origami is a beautiful art form, but thanks to the work of Lang and others it is now also a useful technology. Lang has helped design a telescope lens that collapses into a cylinder so it can be packed aboard a rocket and launched into space. The lens is made from a thin plastic material that has to be carefully folded to avoid any permanent damage, so Lang came up with an umbrella-like origami pattern that would preserve the telescope’s delicate shape. He has also worked on more down-to-Earth projects, such as finding a better way to fold car airbags.

This type of folding could even find its way inside your body. Zhong You and Kaori Kuribayashi of the University of Oxford have developed a medical tube, called a stent, based on the principles of origami. Stents are inserted into the body to support damaged veins, arteries, and other biological tubes. Doctors need them to be small and manoeuvrable, but also be able to expand into a strong tube. Like anything that involves collapsing and expanding, origami-like folding seemed the obvious choice. Imagine what this combination of art and maths might be used for in the future!