With their vertical drops and loop-the-loops roller coasters appeal to thrill-seekers everywhere, but part of the fun is knowing you can walk away unharmed once the ride is over. Designers use Newton’s laws of motion to predict exactly where the coaster’s trains will go and make their rides as fun and as safe as possible.

What goes up, must come down 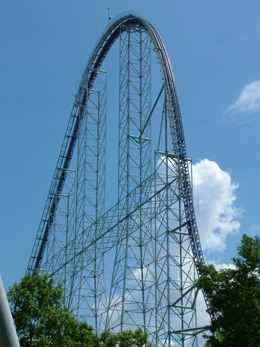 Roller coaster rides usually start with a long, slow lift up a steep hill. It’s partly designed to build up the tension as you anticipate that first drop, but the initial ascent also serves as the coaster’s engine. The lift motor works against Earth’s gravitational field to get the train to the top, and the energy it produces is stored as gravitational potential energy. The total potential energy is U = mgh, where m is the mass of the train, g is 9.8m/s2, the acceleration due to gravity, and h is the vertical height from top to bottom.

A higher slope means the motor has to work harder and use more energy, providing the train with more power for the ride. As the train slips over the first hill and comes hurtling down the other side its potential energy is converted into kinetic energy, which drive its motion. The formula for kinetic energy is T = ½mv2, where m is the mass of the train and v is its velocity. Conservation of energy says that the total amount of energy must always be the same, so T + U = ½mv2 + mgh remains constant throughout the ride.

Suppose the first hill is 50 metres off the ground; how fast will the train be going at the bottom? At the top of the hill all the energy is potential and equal to 50mg, while at the bottom all the energy is kinetic. We know that the total energy has to stay the same, so we can set 50mg = ½mv2 to find that v = ?(100g), or roughly 30 meters per second. In general, a drop from a height h will result in a speed of ?(2gh). This gives the train enough energy to climb back up the next hill on the track, recharging its store of potential energy ready for another drop.

Since coaster trains don’t have engines, the initial store of potential energy has to be enough to power a train along the entire track, but unfortunately for ride designers things aren’t that simple. Some energy is always lost to frictional forces, so each time potential energy is converted to kinetic and back you get less than you started with. The total energy is still conserved, but some of it is turned into heat and noise instead of contributing to motion. This dwindling supply of energy means each hill on the track must be lower than the previous one, or the train could roll back and get stuck. 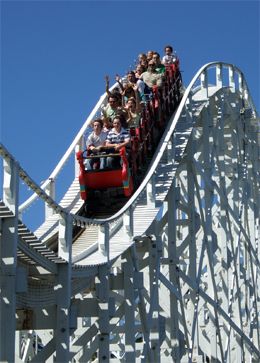 A roller coaster consisting of nothing but increasingly smaller hills is hardly going to make for a white-knuckle ride, so designers include loops, corkscrews, and other thrills in their coasters. All of these special track sections vary the acceleration felt during the ride, making for a more exciting experience. Too much acceleration can be dangerous though, so ride designers must make sure they stick to safe limits.

Accelerations are given in g-forces, which are measured relative to gravitational free fall. Gravity constantly accelerates you downwards, but the Earth’s surface pushes you back up with an equivalent acceleration of 1 g, or 9.8m/s2. Astronauts in zero gravity don’t experience this upwards acceleration, which is why they feel weightless.

You can have a similar experience on a roller coaster. As the train crests over a hill, it accelerates away from your body, reducing the push of the seat beneath you. The resulting g-force is less than 1, so you feel lighter than normal. At the bottom of a drop the opposite is true; the roller coaster seats push up harder as the train turns back upwards, increasing the g-force above 1 and making you feel heavier.

Changes in g-force are part of what make a roller coaster fun, but too much of a good thing can be deadly. At high g-forces blood rushes down from the brain and towards the feet, which can mean a loss of vision or passing at. If sustained for too long, large g-forces can lead to death, so ride designers carefully measure the g-forces of their roller coasters to ensure a safe ride every time. When you step off a coaster it can feel like you’ve been through a crazy, out-of-control experience, but in reality every twist and turn has been mathematically tested to produce maximum thrills with minimum risk.