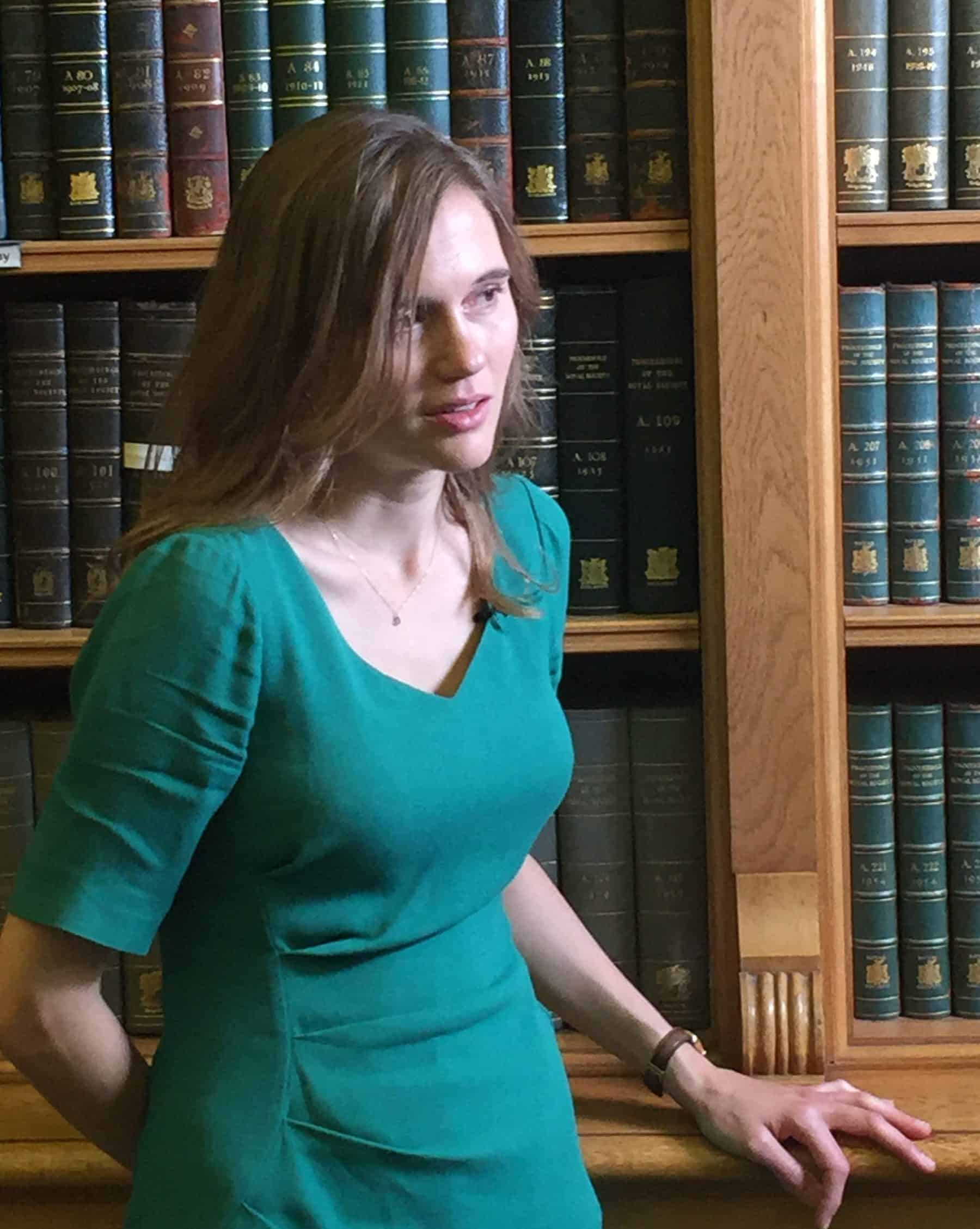 Maria Bruna is the first mathematician to win a prestigious L’Oréal-UNESCO UK and Ireland for Women in Science Fellowship. The Fellowships are designed to provide flexible financial help to outstanding female postdoctoral scientists to continue research in their chosen fields.

Dr Maria Bruna is a Junior Research Fellow at St John’s College and an Affiliate Researcher at the Mathematical Institute, University of Oxford. Maria tells us about the path she took to get there, her research and winning the L’Oréal-UNESCO Fellowship.

Congratulations on being the first mathematician awarded a L’Oréal-UNESCO Fellowship. What do you plan to do with it?

Thank you! The fellowship will allow me to establish a new research line with collaborators from the UK, Austria and Germany. I will use the fellowship money to organise a workshop in Oxford, fund research trips and cover part of the childcare costs of my 7-month old baby.

How important do you think the Fellowship will be for the next step in your career?

This fellowship will be very important in my career. The birth of my son in January 2016 has imposed a natural break to my research programme. I will use the L’Oréal-UNESCO Fellowship to provide flexible childcare arrangements for my son, so that I can further develop key collaborations and projects. This support will place me in the best possible position to eventually apply for a permanent academic position.

The award was made on the basis of your work ‘Multiscale modelling of interacting particle systems’ – could you tell us a bit about it?

I work on developing methods to represent systems of interacting particles that can capture phenomena at multiple scales and explain how individual-level mechanisms give rise to population-level behaviour. These systems appear in many different situations, such as a population of cancer cells, or contaminant particles going through a filter. My research focuses on deriving the continuum (or population-level) description of the system from the discrete (or particle-level) model using systematic methods of applied mathematics. The aim is to obtain practical reduced descriptions, based on partial differential equations, which capture the key attributes at the particle-level (such as the interactions between individuals) and can be used to predict the spatio-temporal evolution of the system.

For example, in the case of cancer cells, this approach allows us to connect the motion of each individual cell with how the tumour moves as a whole. With this award, I plan to develop tools to study the properties of partial differential equations that arise from interacting particle systems, in particular in heterogeneous systems (with two or more types of particles).

Where did you first go to university and what did you study?

At 18, I started my undergraduate studies at the School of Industrial Engineering of Barcelona (ETSEIB), which is part of the Universitat Politècnica de Catalunya (UPC). I enrolled on a 5-year degree in Industrial engineering, with the first 2 selective years involving mostly maths. It was during this period that I realised I really enjoyed maths and that I wanted to continue studying it at a higher level. This is why I then started a degree in Mathematics in the same university. I would go to the maths school in the morning and the engineering one in the afternoon.

Does the industrial engineering part of your undergraduate degree help with your current research?

It’s not that there was an engineering part in my degree, but that I ended up doing both undergraduate degrees in parallel. But even though one might have thought both schools and degrees would have points in common or ‘talk to each other’, this wasn’t really the case, so I had to do the bridging between the real applications and black-box models in engineering and the abstract concepts and fundamental theorems in mathematics. Hence my interest in applied mathematics. Due to the lack of options to pursue this further in Spain at the time, I went to Oxford to study a masters in Mathematical Modelling and Scientific Computing in OCIAM, the Oxford Centre for Industrial and Applied Mathematics. Having done both degrees really helped me in my research, since I had a strong mathematics base thanks to the 4-year maths degree but also the capacity to work on something new or combine maths with programming and modelling thanks to my engineering background.

What intrigued you about mathematical modelling?

I think for me it was the perfect fit after the dilemma during my undergraduate years as to whether I should carry on with the engineering route and find a job in industry or take the mathematics route in university. Coming to Oxford I realised that there is in fact no dilemma and that one can have the best of both worlds. Using mathematical modelling, we can express a real life situation in terms of an equation which we can in turn study mathematically and make predictions about the real problem. For example, I’m currently working with Dyson exploiting some research I did during my DPhil to improve the efficiency of their vacuum cleaners. I personally really enjoy the variety of skills and techniques involved in the whole process.

Could you tell us a bit about the steps you took to get to your current position?

I came to Oxford in 2007 to study a one-year masters, with no clear idea of what to do afterwards. I really enjoyed the year, working on an ophthalmology problem for my dissertation, and I was offered a studentship to stay to do a DPhil in applied mathematics. Towards the end of my DPhil I again had doubts of where to go next, and I looked at options both within academia and industry. In the end I got a research fellowship within the 2020 Science programme, based between Oxford and Microsoft Research in Cambridge. A year later I joined St John’s College in Oxford as a Junior Research Fellow.

You spent four months as a visiting researcher in Sydney in 2011. How did this help your research and are there any significant differences for a researcher in England and Australia?

The research stay in Australia helped my career in many ways. I went there to visit my DPhil supervisor, who was spending a sabbatical year in Sydney. But I ended up spending quite some time on my own, going to a Maths in Industry study group and meeting local researchers with whom I’m still in touch today. I also visited New Zealand and gave a couple of seminars there. I think that spending time away from Oxford helped me become more independent and confident. Regarding differences for researchers between the two countries, apart from the obvious one (the temptation of staying outdoors to enjoy the weather in Sydney), what struck me the most is that Australian and New Zealand mathematicians are like one big family, who despite the large distances are very good at working together.

As a European mathematician working in the UK, do you have any concerns about the potential impact of the UK leaving the EU?

Yes, of course. I have concerns as a European, since an important factor in my decision to come here in the first place was that I wasn’t leaving Europe. But more so as a UK resident and especially as a UK researcher. I fear that Brexit will have a huge impact on the economy, the welfare state and the environment. I am also concerned about the opportunity cost of limited access to EU research grants and collaborations with European partners, as well as the fact that the UK is becoming a less attractive destination for talented researchers.

Some of the statistics about Women in Science are startling – only 15% of STEM roles are taken by women and 71% of people in the UK (60% in Europe) think men are more suited to high level science positions. Have you found this to be a barrier when pursuing your career?

No it hasn’t been so far. But then I’m not yet at that career point when most women struggle to make the jump to the next level (from postdoctoral to permanent positions). Although I think academia in the UK is a relatively good place for women compared to other sectors and countries. During my university studies I occasionally encountered discrimination – had to hear rude comments about how surprising it was that being a woman I could get this or that right, but didn’t want to give it too much thought. I had a lot of support at home and I guess I had the confidence to be able to ignore such comments.

As the first mathematician to win this important fellowship, do you see yourself as a role model for young women?

I hope that this news will encourage more female mathematicians to apply for a L’Oréal-UNESO fellowship in the coming years. Despite mathematics being one of the sciences where the gender gap is most marked, I think that few mathematicians have applied for it so far.

How important do you think awards and organisations that emphasise the importance of women in science are?

I think that initiatives such as this fellowship or the Athena-Swan Charter at the University level to support women in science are really important. But I also think we should be careful with the dangers of positive discrimination. In Germany, for example, they now have a very firm policy to increase the number of women in academia, so firm that in some cases permanent positions are almost impossible to get if you are a man. I would not want people to think I have got a job because I’m a woman.

What do you think the maths community could do to better enable women to pursue careers in maths?

Initiatives to help women who are already at university are great, but personally I think the key is education in schools, especially in primary schools. I was taught to enjoy maths and see its use in everyday life from a very early age. I feel we should rethink the way maths is taught and mix it a lot more with the other disciplines so that kids realise that mathematics has applications in many different areas. And perhaps a way to address the gender gap in mathematics at an early age could be to make some of these applications more appealing to girls so that they don’t feel maths is not for them.

Regarding supporting female mathematicians at an early career stage, either in academia or industry, I think that a better work-life balance and  flexible work arrangements would make a career in maths much more attractive. Most mathematicians don’t need much equipment or access to a lab to work, so we should allow flexibility and control over when and where they work.