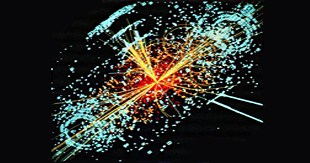 Smashing up the universe

Home / Smashing up the universe

In a ring 27km round, colder than deep space and engineered to micrometer precision, the world’s best scientific minds are trying to recreate the universe’s baby photos. This is the Large Hadron Collider (LHC), an ambitious project which hopes to find the smallest pieces that make up matter and study them. Not only is it a huge engineering project needing the best practical mathematical skills, the results you get are written in the language of nature – maths. At this deep level, the maths gets very complex, rich and strange indeed.

All the way down

The tiniest bits of matter we’ve found so far all have different masses. The particles we normally see are the lightest ones. As the energy around increases, heavier and heavier particles can exist. Physicists think the heavier particles hold the key to explaining how the whole family of particles are related – maybe revealing underlying symmetries or extra dimensions – and why they behave like they do. 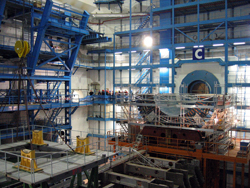 To catch a glimpse of the more exotic particles you need a lot of energy in one spot. This is done by accelerating up two hadrons (this is a type of particle: the first ones used will be protons) to almost the speed of light and slamming them into each other. Using gigantic magnets to steer particles into each other at the speed of light requires some precise calculations. When they collide, the kinetic energy released forms a host of new particles, and by tracking how they move the particle physicists can figure out things about them. Check out the CERN rap to see the sort of things they’re looking for.

The rare particles that will give us new physics aren’t actually visible to the detectors – their movements need to be calculated by measuring absolutely everything that is produced in the collision, and then using the ideas of conservation of energy and momentum to find the missing pieces. This involves manipulating vectors – but since the particles are travelling so close to the speed of light, general relativity gets involved. This means these vectors have four dimensions, three for space and one for time.

Practicing finding a needle in haystack 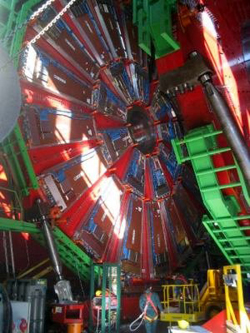 Billions of particles will be produced every second, and there isn’t a computer in the world that can handle that kind of data. So mathematicians and programmers design software that will sift, lightning-fast, through this information and only hold on to the 0.1% that are interesting. To check these filters are right, they needed a lot of numbers to practice on, which were generated by the billion using numerical simulation.

Science experiments are impossible without maths, and the biggest one ever is no exception. The LHC is a giant exploration of the most fundamental ingredients of the whole universe. If the discoveries we’ve made so far are any indication, the underlying structure will be strange and beautiful, and written in maths.