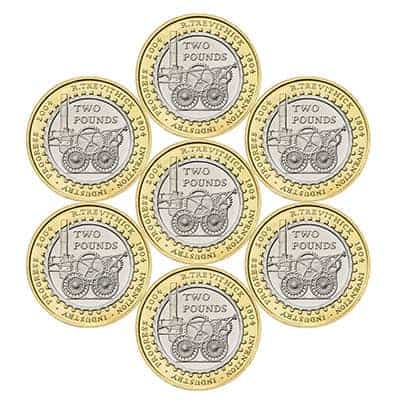 In mathematics the ‘kissing number’ is defined as the largest number of circles which can touch another given circle of the same size. You can find the solution easily by using coins. It is pretty obvious that only six coins can touch another central coin at one time.

Therefore in two dimensions (mathematically known as being ‘in the plane’), the kissing number is six. In mathematics it isn’t enough to just show that one particular solution works, we need to prove that six is the maximum number, and that there can’t be a clever way of using seven or more coins.

Proof that the kissing number is six in the plane.

Let us label the centre of our central red circle as

and the centres of our surrounding circles as

Let us now imagine that we have got more than six circles surrounding our central circle. Now let us draw in the triangles with vertices

. (See the diagram below.) In the triangle

is the radius of the circle.

in a circle which means that if there are seven or more outside circles, then there has to be at least one of these triangles which has an angle

which is less than

This makes the triangle

an isosceles triangle. It also means that the length

must be less than

This is because the longest edge in a triangle is always opposite the largest angle.

then the other two angles will be greater than

will be bigger than the length

in length then this means that the circles must overlap which is not allowed!

We have used a method known as proof by contradiction to show that it is impossible to have more than six circles surrounding a central circle.

The kissing number in 3D.

It took hundreds of years for mathematicians to come up with a proof. In 1953 Isaac Newton was finally proved right when the kissing number in three-dimensions was proved to be 12. There is still a lot of space left over, so you can see why people thought that you can fit more than 12 spheres around a central sphere. 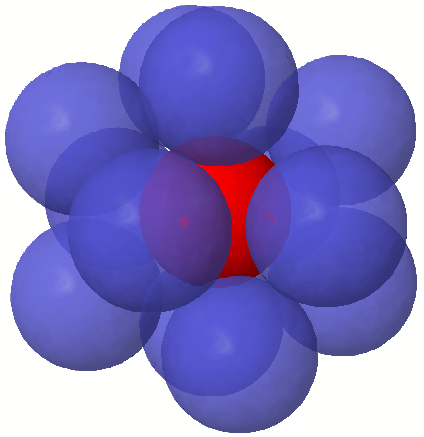 In 3D, the kissing number is twelve.

Kissing numbers in other dimensions.

Here is a summary of the first ten dimensions.

To find out more read this Plus Magazine article on Newton and the kissing problem.