Periodic cicadas are a weird kind of insect, and not just because they look like a very ugly grasshopper! Most cicadas (pronounced sih-car-da) live for just a few years, but periodic cicadas live much longer, with lifespans of 13 or 17 years depending on the species. Biologists aren’t exactly sure why the cicadas live this long, but it’s probably got something to do with prime numbers.

Primes can’t be divided by any number other than themselves or one, and they form the building blocks of all other numbers. A number like 21 isn’t prime because it can be split into 3 × 7, but 3 and 7 are primes because they can’t be split any further. We say that 3 and 7 are the prime factors of 21. The lifespans of the periodic cicadas, 13 and 17 years, are also prime numbers – a fact which actually helps keep them alive. 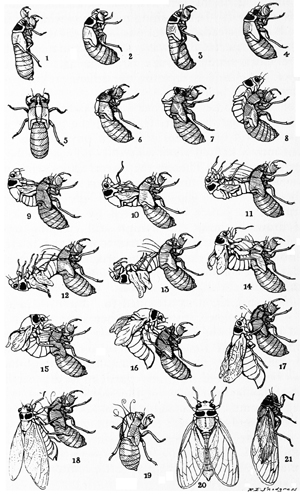 Cicadas lay their eggs in tree bark. When the eggs hatch, the young insects fall from the trees and burrow into the ground. They spend most of their lives hidden beneath the soil, only surfacing in their final year to transform into adults. The adult cicadas mate and lay eggs, then die a few weeks later. When the newly laid eggs hatch, the cycle starts again.

Periodic cicadas are only found in certain locations in North America. The cicadas in each location all emerge from the ground at the same time, and biologists think that emerging together helps the cicadas to overwhelm any predators. Because there are so many cicadas popping out of the ground at once they can’t possibly all be eaten, and the ones that survive are able to produce the next generation. But why not surface every 12 or 15 years, rather than 13 or 17?

It’s all to do with the power of the primes. A prime-number lifespan means that the different species of cicadas will rarely overlap and they won’t have to share food when they emerge. The cycles of 13 and 17 years sync up every 221 years, because 221 is the lowest number that can be divided by both 13 and 17. Mathematicians call 221 the “lowest common multiple” of 13 and 17. If the cicadas lived for a non-prime number of years, they’d meet up more often.

Imagine that instead of 13 or 17 year lifespans, periodic cicadas lived for 12 or 18 years. To work out the lowest common multiple of 12 and 18, we need to find the prime factors. In this case, 12 factors into 2 × 2 × 3 and 18 into 2 × 3 × 3. To find the lowest common multiple, we remove the prime factors the two numbers have in common, then multiply one number by the remaining factors of the other. That gives us 12 × 3 or 18 × 2, both of which equal 36, so these non-prime cicadas would overlap more than six times as much as the prime ones. 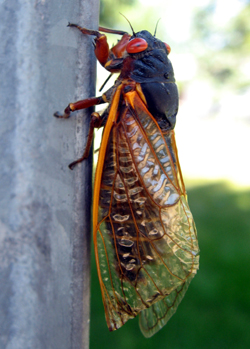 The maths tells us that prime numbers help the periodic cicadas survive, but the insects haven’t purposefully chosen these numbers. Biologists studying the cicadas think they originally started with non-prime lifespans, but eventually evolved to use prime numbers instead.

One explanation is that the more often the two types of cicada overlap, the more likely they are to breed with each other, which could lead to problems. If a 12-year cicada mated with an 18-year cicada, their offspring could end up somewhere in the middle, with a 15 year lifespan. If this kept happening, the cicadas would eventually be emerging at all sorts of different times, and there wouldn’t be enough of them to overwhelm the predators. The non-prime cicadas would die out, leaving just the primes we have today.

Another possibility is that prime numbers help the cicadas avoid predators with shorter lifespans. The birds and small animals that eat the cicadas have their own periodic cycles of between 2 and 5 years. If the cicadas had lifespans of 12 or 15 years then they would often sync up with their predators, but the prime lifespans 13 and 17 help protect them by avoiding common factors. Whatever the explanation, primes are written into the periodic cicadas’ genetic code as the basis of their survival.