Explaining Mechanics with a Marble run

The principles of the mechanics of motion are introduced in the Physics curriculum in Key stage 4 in terms of the interchange between kinetic and potential energy and forces. This is further enlarged upon in Key stage 5 where Simple Harmonic Motion is discussed. A Mathematical treatment is introduced in the study of mechanics at Key stage 5, with motion in a horizontal and then vertical circle being covered in later mechanics modules.

There are many aspects of mechanics that initially appear counter intuitive; an example is that two bodies of the same size and shape but different masses will, when released fro the same height, hit the ground simultaneously. Similarly, the idea that horizontal and vertical velocities of a projectile may be analysed independently is not one which comes without some thought. However, this concept is an excellent demonstration of the idea of velocity as a vector.

The explanation of many of these principles may be assisted considerably by a practical demonstration using of a simple marble run. It has the great advantage of being familiar, but able to exhibit physical principles on a wide variety of levels. By adding measurement tools, the mathematics underpinning the physics may be demonstrated in a very powerful way linking back to the original insights of mathematical scientists such as Isaac Newton.

The marble run comprises a flexible, plastic track built from two parallel rails, much like a railway. These can be joined easily and, with a wide variety of supports, structures resembling roller coasters can be built. The ‘cars’ are marbles, either steel or plastic which are useful as they have different masses.

This can be demonstrated using a slope of constant angle and releasing marbles from different heights. It becomes apparent that marbles released from a greater height attain a higher speed at the bottom of the slope, but that speed at the bottom is not linearly related to the release height. Using light gates at the bottom of the run, it will be possible to measure speed and relate it to release height. This will also provide an opportunity to discuss the effects of friction. 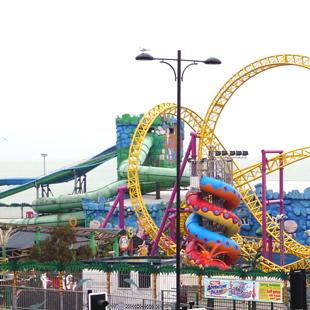 A roller coaster run (initially without vertical loops) is a good way to demonstrate the conversion between potential and kinetic energy. Students will rapidly grasp that the marble gains speed as it falls from its release point, and loses it again as it climbs back. This can lead to discussions about how to design the track so that the marble will always reach the end. This provides another opportunity to discuss loss mechanisms. This can also be demonstrated using a ‘U’ shaped track and observing the marble dissipating its energy as it oscillates back and forth. This can be used as an example of damped simple harmonic motion for Key stage 5.

The marble run can be used as a launch for projectiles. By building a ramp with a horizontal section at the bottom, and a sand tray to catch the marble safely, the range of the marble can be related to its launch height. By arranging the track so that the marble is launched at a small upward angle to the ground, the subsequent increase in range can be demonstrated. In later mechanics modules, the relationship between range and release angle has to be derived, but the principles can be explained to younger students. This can also lead to a discussion of siege engines.

Motion in a Circle

Motion in a horizontal circle can be investigated by building a circular section of the track. This demonstrates Newton’s First Law but also introduces the idea of centripetal force since, as the speed of the marble increases, it will leave the track at the point at which the centripetal force provided by the track becomes insufficient for the chosen speed and radius. Thus the influences of speed and bend radius can be investigated and the use of a banked track to permit higher speeds may also be shown.

The principles of motion in a vertical circle can be demonstrated using a ramp feeding into a loop. Having discussed kinetic and potential energy and speed, students can deduce the variables which dictate whether the marble will complete a full circle. This can lead to a discussion on the construction of roller roasters.

A marble run can be obtained from:

Light gates for measuring the speed of the marble can be found from a variety of suppliers of school scientific equipment. On example is: