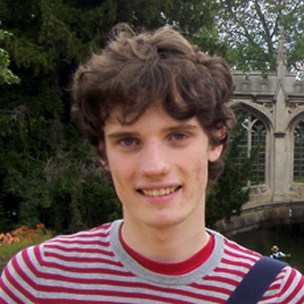 “If you do a maths degree, then there is a wide range of areas where people will welcome your skills.”

What is your masters degree all about? Is it a relatively new field?
It’s an introduction to all aspects of research in speech and language technology. This includes areas like speech recognition, speech synthesis and computer translation. The area is relatively new, as historically it has been limited by the computer power available to do these things. In most science fiction set in the future, there are robots that can hold a conversation with you- but there is a lot of work to be done before this is possible. Behind every task in language technology, there is usually a well-defined mathematical model which encapsulates the problem.

What did you enjoy most about undergrad maths?
I studied a wide range of areas in my maths degree, both pure and applied. I had the chance to learn quantum mechanics and cosmology, as well as pure areas like graph theory and number theory. Studying maths, you are constantly building on top of your knowledge, such that problems which looked impossible to you a year ago are now simple. I love the feeling of having mastered something that previously seemed undoable.

How do you use the skills you picked up in undergrad maths in your current role?
The most successful fields in speech & language technology have a rigorous mathematical basis. The ability to quickly get a feel for mathematical objects described by a set of cold definitions is extremely useful. The task of automatic translation, for example, can be described with a probabilistic model. Not only do you need to be able to see how the model works, but also how it could be improved and extended, and how a computer could actually be used to use this model. Having a degree in maths has been great preparation for this stuff.

What’s the best thing about what you do?
I like that you can learn about all sorts of stuff other than just language when doing this research. For example, I am currently creating a robot tour-guide which will take people around an exhibition in the Edinburgh Festival. For that I’ve had to learn about the art that’s on display, as well as how to make a dialogue system. My supervisor is currently working on a robot bar-tender, and a system that can help deal with medical issues. I’ve also read about a dialogue system which is in use on the International Space Station, helping astronauts perform maintenance tasks. Pretty cool!

Did you always want to go into this area? If not, when and how did you find out about it?
I only realised that this area existed in my last year of my undergraduate degree. It seemed like the perfect area for me, combining mathematics with technology and linguistics. Previously I was interested in working in the space industry, but I changed my mind on that. I spoke to some people in Cambridge working in computational linguistics to find out more about the area and doing research. They recommended the course in Edinburgh and so I went for it.

Do a lot of mathematicians go into speech and language technology?
There are only 6 people doing the same MSc as me this year: half of them are linguists, two are computer scientists, then there’s me. I believe there are a few people with maths backgrounds in the area, but it is quite interdisciplinary. That’s another thing that attracted me to the area, getting to work with people with lots of different backgrounds who can all contribute to the problem in their own way.

What’s next for you?
In October I will be starting a PhD back in Cambridge, on the topic of statistical dialogue systems. Dialogue systems are computer programs you can have a conversation with, so I’ll be looking at the application of statistics and probability theory to this problem. This is actually in the Engineering department, in the Machine Intelligence lab. That will take about 3 and a half years, and after that I will probably continue research, either in an academic setting or in industry.

What advice would you give to anyone looking at getting into what you do?
Talk to people in the area you want to start research in and get their advice. They will be very friendly and will help you on the process of getting started in research (and if they’re not friendly, who wants to work with them anyway?). If you do a maths degree, then there is a wide range of areas where people will welcome your skills.

Check out Matt’s great blog on maths at http://blog.matthen.com/