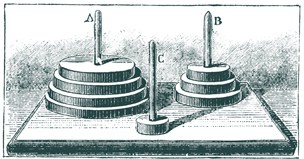 The Tower of Hanoi is a famous problem which was posed by a French mathematician in 1883.
What you need to do is move all the disks from the left hand post to the right hand post. You can only move the disks one at a time and you can never place a bigger disk on a smaller disk.

Try it out here.

The minimum number of moves for any number of disks

Many people want to know what the minimum number of moves needed is when you have 5,6,7 or any number of disks.  This can be surprisingly easy to show and will save you time wondering whether you have actually found the most efficient way to solve the Tower of Hanoi problem.

For N disks, first of all move N-1 disks to peg B using the minimum M moves.

In total you have used 2M+1 moves to solve the problem for N disks.

Minimum moves with the Tower of Hanoi

They are actually powers of 2 with one subtracted : 2N-1

So we now have a formula for the minimum moves with the Tower of Hanoi.

In one version of the puzzle Brahmin priests are completing the puzzle with 64 golden disks.

If you had 64 golden disks you would have to use a minimum of 264-1  moves.  If each move took one second, it would take around 585 billion years to complete the puzzle!