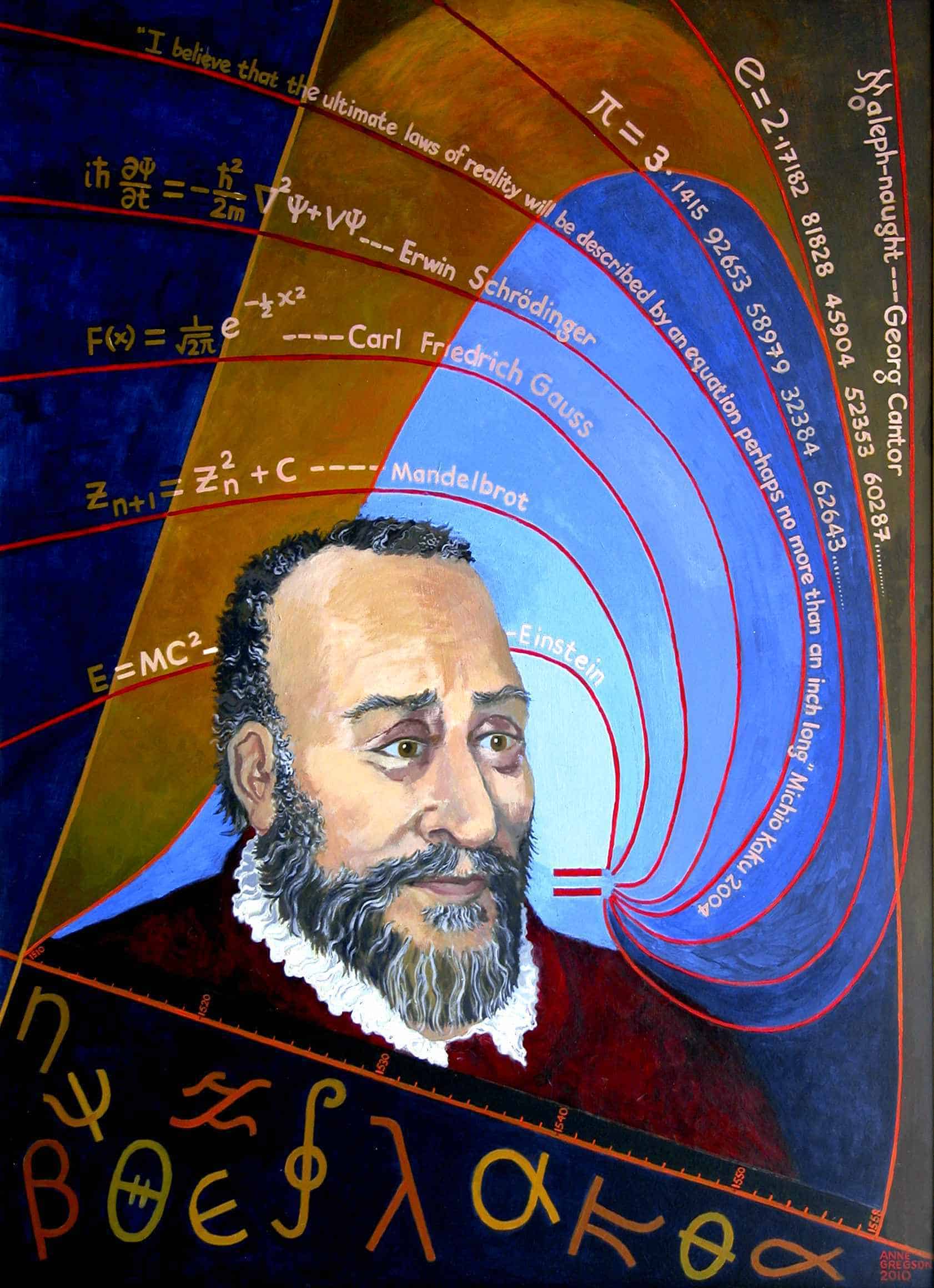 Do you have any mathematical heroes? My favourite is Robert Recorde (1512?–1558), the Welshman from Tenby, Pembrokeshire, best known for having invented the equals sign ‘=’. He’s a hero for me, not so much for that, but because he was the first in Britain to think seriously about the challenge of learning and teaching mathematics, about how to make mathematics available to a wide population.

Recorde was our first maths teacher, and the first to write books in English setting out the principles of arithmetic and algebra. He was also the first to interpret the classical geometry of Euclid for ordinary people. In the tradition of tragic heroes, Recorde died defending his principles. Mathematics doesn’t deceive and Recorde himself was unwilling to be party to any form of deception. He paid the ultimate price for taking such a stand.

The image shown is Magical Symbols: an interpretation by the Pembrokeshire artist Anne Gregson, showing the use of Recorde’s ‘=’ sign in iconic equations. This painting and other Recorde-related material, including his books, can be seen at the Tenby Museum and Art Gallery.

Tenby was a small, bustling town back in 1500. Remotely situated and difficult to reach by road it was a popular port visited by ships from far and near, its harbour attracting traders and merchants of a wide range of goods. The success of the town depended on the trading skills of its businessmen. The port officials were also busy collecting taxes from the visiting ships. The common people, referred to by Recorde as ‘the vnlearned sorte’, needed a wide range of mathematical skills to be able to go about their business, including keeping accounts and ledgers, exchanging currencies, and weighing and measuring of all kinds using a bewildering mixture of units.

One of the immigrants to Tenby during the fifteenth century was Roger Recorde, a merchant from Kent. Roger’s only son, Thomas Recorde, was also a merchant in the town. Thomas married Ros Johns, the daughter of a Welsh family from Machynlleth in mid-Wales. Robert Recorde was the younger of two sons of Thomas and Ros. Little is known of Robert’s early life in Tenby but he was clearly influenced by the comings and goings in the busy port and the extensive mathematical skills used by the tradesmen and craftsmen of the town. He probably attended a chantry school in St Mary’s Church and managed by one means or another to secure a place at Oxford. After graduating there, he went on to Cambridge where he qualified as a doctor, thus enabling him to practise medicine.

Recorde became known at Court and was appointed to oversee the Royal mints at Bristol, London and Dublin and to supervise the silver-mining operations in Ireland. He augmented his salary from these sources by continuing to undertake some medical work and to give private lessons in mathematics. He was a conscientious worker but was politically naïve. He became embroiled with the Earl of Pembroke, his line-manager, whom he openly accused of siphoning money off the profits made by the mints, so depriving the Crown of its due income. Pembroke sued Recorde for libel and claimed damages. Being a member of the Privy Council, Pembroke had the upper hand and Recorde was unable to secure a fair trial. He was found guilty and sentenced to pay £1000 costs, a sum far beyond his means, being roughly equivalent to £300,000 today. As a result, Recorde was sent to serve time as a debtor in the King’s Bench Prison at Southwark, south London, where, in his late forties, he contracted a fatal disease and died in tragic circumstances.

This is an abridged version of a chapter on Robert Recorde by Gareth Ffowc Roberts in Count Us In (Cardiff, 2016), see www.garethffowcroberts.com.