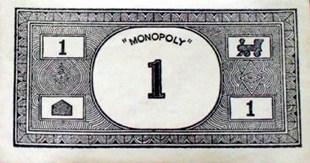 You know the drill, after all Christmas Day is the same every year: too much turkey, another pair of socks and the Queen delivering her annual festive speech. Afterwards, just as you sink into a comfy chair, to partake in a full-stomached doze, some distant relative perks up with: “anyone fancy a game of Monopoly?”

Monopoly is board game Marmite: some people love it, some hate it. Whichever camp you fall into, if you do end up playing you’ll probably want to win. The question is: how? Nothing will blunt the enthusiasm of the person who suggested it like the bitter taste of defeat.

Let’s start with a simple fact: the most occupied square is Jail. This is obvious when you think about it: the sole purpose of a whole other square is to put you behind bars; a “Chance” or “Community Chest” card can send you to the clink; three double rolls and you’re a convict; you could also, of course, merely land there and be “Just Visiting”. No other square has more ways to get you to it.

That’s all well and good, but what about the most frequented set of properties? Which is the best colour to buy? Instinctively you might plump for the purple of Mayfair and Park Lane. Wrong. It is best to opt for orange. Here’s why. When rolling two six-sided dice there is only one way to make two: one and one. However, there are 6 ways to roll a seven: 6 and 1, 1 and 6, 5 and 2, 2 and 5, 4 and 3 and 3 and 4. Thanks to the rule that rolling a double provides the player with another turn, there are actually even more ways to make seven. In fact, when you take doubles into account, the most likely totals to have rolled by the end of your turn, in order, are: 7, 9, 8 and 6 (joint with 5).

Here’s the full picture in the form of a graph: 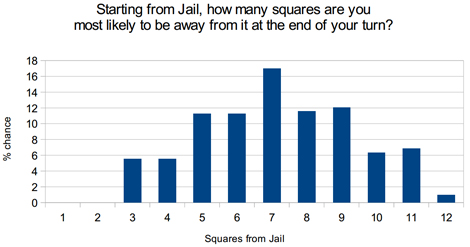 A quick glance at a Monopoly board reveals that, from Jail, a move of seven squares will land you on “Community Chest”. But a move of 9, 8 or 6 squares, the next most likely moves, will plonk you straight on each of the three orange properties. In short: buy orange. Anyone starting from Jail will have a 35% chance of landing on your property at the end of their turn. Easy money.

So buy all the oranges, and snap up Trafalgar Square, and on average you’ll have a better chance of ending up victorious.